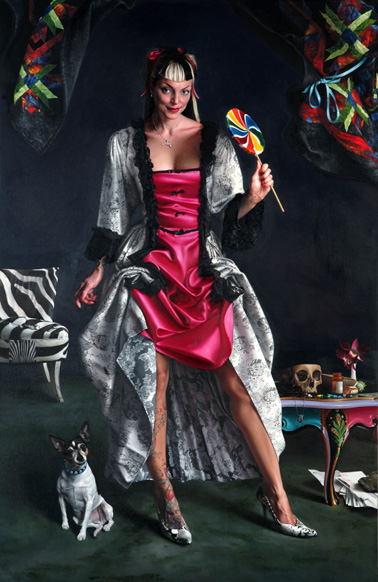 "An academic definition of Lynchian might be
that the term refers to a particular kind of irony
where the very macabre and the very mundane
combine in such a way as to reveal the former's
perpetual containment within the latter.” -David
Foster Wallace.
#
Having gained iconic status as a film director,
David Lynch’s broad span of artistic influence
has been largely overlooked, only recently being
the subject of a survey exhibition at Fondation
Cartier. LYNCHMOB proposes a first attempt to
locate and trace the influence of David Lynch’s
myriad contributions to contemporary art across
a wide spectrum of media and artistic practices.
#
Curated by Emilie Trice & Christopher David,
LYNCHMOB brings together a group of 30
international contemporary artists, each of
whom were asked to create and contribute work
stemming from, inspired by or in direct response
to the oeuvre of David Lynch.
#
The world of David Lynch is by and large a
complex one, in which the darker recesses of
the human psyche reveal themselves and
confront the audience with glimpses of their own
subconscious desires, psychological
abnormalities and sexual perversions. Lynch's
signature style oscillates between the banality of
the everyday and the irrationality of dreams,
while magnifying the depravity and absurdity
often concealed behind the most tranquil and
otherwise non-assuming facades. While cultural
theorists and critics have made efforts to
deconstruct the multi-faceted aspects of Lynch's
work, ranging from psychoanalytic
interpretations to notions of the auteur,
LYNCHMOB offers a visual exploration of these
aspects and their manifestation in our collective
consciousness, as embodied by the work of this
group of contemporary artists, many of whom
created original work specifically for the
exhibition.
#
This exhibition presents itself as a constellation
of environments that illuminate reoccurring
elements in Lynch’s work, beginning on the
ground floor gallery of HBC with David
Nicholson's photorealistic life-size oil portraits of
fetish models, Zak Smith's sexualized paintings,
Gary Rough's minimal abstractions of female
genetalia, Christoph Steffner's self-penetrating
‘Fuck Machine’ and Sandro Porcu's beating heart
sculpture, among others. These works all offer
explicit references to pornography, intimacy and
sadism ranging from the grotesque to the
sublime and co-mingle in an erotic arena that
pays homage to Lynch's self-described
perception of sex: "Sex was like a world so
mysterious to me...it has all these different
levels, from lust and fearful, violent sex to the
real spiritual thing at the other end. It´s the key
to some fantastic mystery of life."
#
Utilizing the anachronistic architecture of HBC
(the former Hungarian Cultural Center) as an
integral part of the exhibition experience, with
its veneer wood paneling, a labyrinth of rooms &
hallways and an exquisitely Lynchian red-lit
theater, LYNCHMOB recreates and refers to
settings from Lynch's best-known films using
painting, sculpture, photography, live
performances and video, such as an early
"bootleg" work by Douglas Gordon and Oliver
Pietsch's montaged vingetts of Hollywood film
footage, borrowed from movies like Blue Velvet
and Twin Peaks. Together, these works and
their intertwined constructions further create a
complete Lynchian environment that rapidly
veers from fantasy to horror, from the mundane
to the absurd
#
LYNCHMOB’s ultimate aim is to invoke in the
viewer the same psychological and emotional
response as Lynch's films and other artistic
endeavors. Stemming from the vast lexicon of
compelling, if not unnerving, imagery amassed
through Lynch’s diverse contributions to
contemporary sub and mainstream culture,
LYNCHMOB revels in the pornographic, the
esoteric, the uncanny and the depraved. David
Lynch, we salute you.
#
February 7 -21st
#
.HBC Karl-Liebknecht Strasse 9 /
Berlin Alexanderplatz
#
Vernissage 6pm Saturday, February 7th /
Gallery hours: Tuesday-Saturday 1-7pm/
Finissage Burlesque: 8pm February 21st
#
www.bhc-kollektiv.org /
www.kollektiv-berlin.com
#